A couple of weeks ago I was sick with the flu. I spent Saturday on the couch with my soup and a head cold in a miserable state.

Lucky for me, I subscribe to Netflix so I decided to rewatch Season 1 of Lost. I really didn't watch Season 1's episodes the first time so I thought I would pay closer attention to details this time. Anyway, I was sick and had nothing better to do.

After rewatching a few of the episodes, it dawned on me what was happening on the island and to the Lost characters.

I will stop here and warn you. If you do not want to know my theory or learn about any spoilers then do not scroll down this page. I will not be upset if you turn the donkey wheel and transport yourself elsewhere.

But, if you do want to know my theory, I will give you three chances to stop and reconsider before revealing my theory, a la Locke with Charlie when Charlie wanted his drugs.


It's a Game: Backgammon

After watching the episode with Locke and Walt on the beach playing a certain game together, I realized that Lost was a human backgammon game between Jacob and the Man in Black. The Lost characters are the pieces and the island is the game board.

In backgammon, to win a player must get all of his/her pieces off the board first. In Lost, the goal is get off the island first which the Man in Black is trying to do in Season 6.

The Playing Pieces: the characters

4, 8, 16 are all numbers on the six-sided doubling cube. In backgammon, there are two-sets of 15 playing pieces. On the board, points are numbered and one point is notably numbered, 23-point . And for the last number, 42 is an opening roll strategy in backgammon.

Having said all of this, my hope is that in the final episode we will finally see a full shot of the entire Lost island. I may be wrong, but we have yet to see the entire landscape and topology of the island, a bird's eye view. I found a few probable Lost island shots on Google Images. As you can see in this image, the forests on the island make up points just like those on a backgammon game board.


My final hope for the last episode is a camera shot of an old, almost ancient backgammon board used by Jacob and the Man in Black somewhere on the island. I think whomever the next candidate to protect the island will inherit the game to play against the Man in Black or the next nemesis. Because there must be two players to play.

If you are still skeptical of my theory, I encourage you to read the backgammon page on Wikipedia. There you will find the history of the game, men used as playing pieces, the numbers, the Jacoby Rule, and a technique called bearing off (polar bears).

Please feel free to leave comments for me if you agree, disgree, or have other thoughts. If you have a better theory I would love to read it. Lost is a masterpiece and I have loved watching every minute!

Posted by Corey Leong at 7:00 AM No comments: 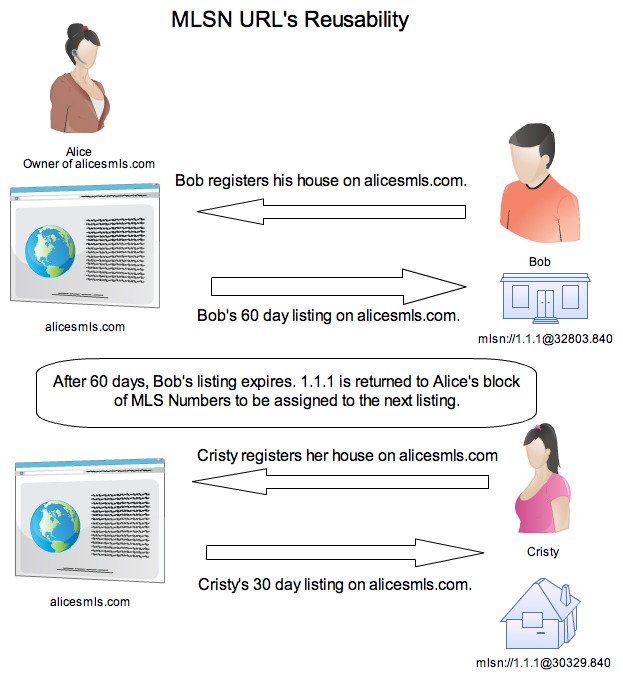 One of the major benefits of MLSN URL's is the ability to reuse assigned MLS Numbers. Using an simple scenario, I'll go in detail of how reusability works with MLSN URL's.

In the diagram above, Alice is an owner of an accredited OpenMLS registrar. Her service is located at alicesmls.com.

Unfortunately, Bob's house does not sell within the 60 days and expires. When this happens, the assigned 1.1.1 or triple short number returns to Alice's block of MLS numbers to be reused again.

As you can see, 1.1.1 was used once with Bob's listing and then again with Cristy's. Each MLSN URL represents two completely different listings, which demonstrates reusability.

By the way, the number 840 in the MLSN URL's represents the iso country code for the United States.

Posted by Corey Leong at 3:42 PM No comments: